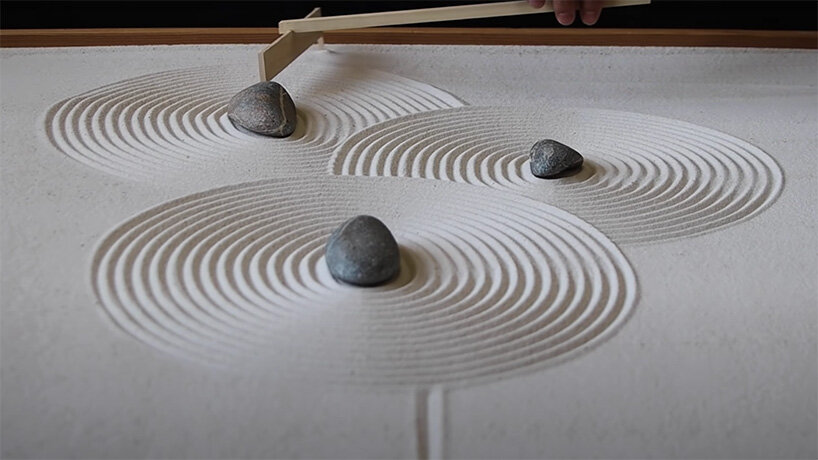 THE ZEN GARDEN PRACTICE IS BOTH A MEDITATIVE AND CREATIVE OUTLET

breathe in, breathe out. repeat. the zen philosophy urges followers to sit back, relax, and go about their days with a sense of mindfulness and purpose. unfortunately in modern times, finding the time and ability to disconnect from technology, busy schedules, and sensory overload is next to impossible. that’s why bay area artist and designer yuki kawae is inviting people to relax, not only with his videos, but by creating their own zen garden complete with a box, rocks, sand, and a rake.

‘I was quite overwhelmed with day-to-day tasks and what are the ‘expected’ next steps in life…’ kawae told colossal. ‘one day, I realized all of those thoughts were completely gone when I was gardening, pruning, watering, and re-potting the soil. that process let me be clear-minded somehow, and it was very calming and refreshing.’

before starting with his zen garden project, yuki kawae used to take care of a small fiddle-leaf plant. the relationship he developed while watering it daily and watching it grow resulted in a great personal insight: the simple act of taking care of a houseplant aided with his anxieties. this inspired him to craft his own dining table-sized zen garden, tools and to look for rocks and other objects to complete it.

kawae took to instagram, where he has been posting his videos, which have, in turn, become wildly popular. ‘it used to be that I was just doing it for my personal clear-mindedness, but because I understand that people also enjoyed viewing it, too, it motivated me to do more of it,’ the artist told white wall. ‘it blew my mind to read the positive comments—how it helps with headaches to insomnia, et cetera. this is the least I can do to help as a person in the creative field, and I am truly glad to be able to help as I know how hard it is to stress all the time.’

yuki kawae says that the zen garden practice is both a meditative and a creative outlet. he talks about the amount of concentration it requires to create the patterns and the strong impermanent characteristic that surrounds it. ‘you may have some idea of the end product but with trial and error, you end up with a completely different end pattern,’ he says. ‘all the zen garden patterns are not permanent, and they get erased to start a new one. it is temporary like many things in life. it taught me about what not to overthink as what I am stressing about may also be temporary.’