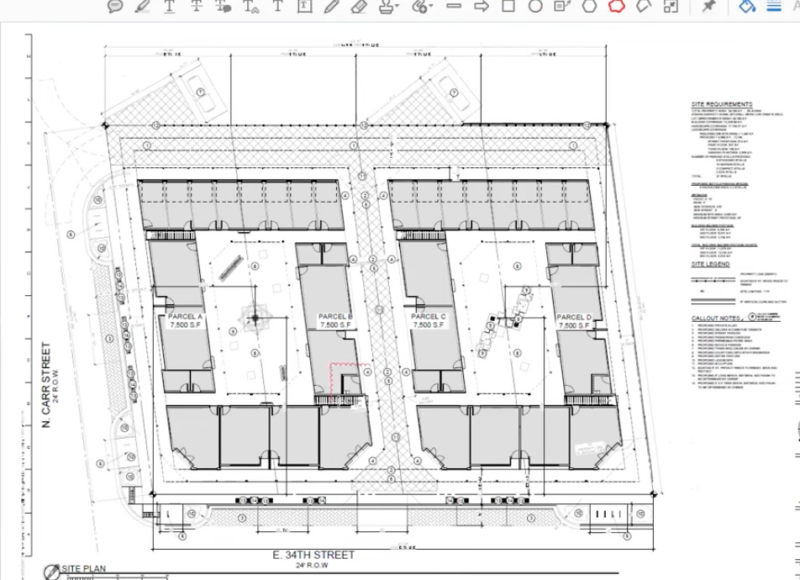 A piece of the French Quarter could be coming to Garden City.

Earlier this week, the Garden City Design Review Committee gave a thumbs up to a project from former mayoral candidate Hannah Ball to develop a 16-unit live-work style project at 213 and 215 34th Street near the Boise River. The project design includes two buildings with open courtyards, balconies with decorative railings and hanging baskets to provide landscaping in the style of traditional Spanish architecture styles commonly associated with New Orleans.

Ball didn’t give a specific price point for the units at the hearing, but she said they will be “naturally more affordable” due to the small size of the spaces available.

There will be eight living spaces with nearly 1,000 square feet and an attached roughly 500 square foot workspace in each unit.

There will be two separate buildings, one on each parcel, with the units encircling two 2,800 internal courtyards with a 20-foot wide pedestrian pathway along the property line adjoining the nearby development. The project will also bring 250 feet of new sidewalk to the street, which will also connect to other proposed projects in the largely undeveloped neighborhood.

Jones told BoiseDev in an interview the plan is to have some of the units sold to buyers like a condominium and for other units to be rented. He did not have an exact number of how many units that would be sold or rented at this time.

It’s located near the approved Casino Beach development, coffee shop Push and Pour and Roots Market. Construction plans show fountains, fireplaces and seating areas inside the courtyards for residents and pedestrians in the to use.

The backside of the property will have sixteen individual garages, one for each tenant. This space can be used for storage, workspace or to park a car. There are also nine street parking spaces for visitors or anyone else to use built into the streetscape of the project.

“By bringing in (16) new Artists and Entrepreneurs to this area that has a close proximity to both the greenbelt and public transportation while allowing these individuals to work and live onsite, this project reduces motorized congestion, and strongly promotes the use of non-motorized forms of transportation for individuals who otherwise would be driving to work each day.

This project application came in just under the wire to be able to use the Surel Mitchel Live Work Create District zoning overlay, which was written to encourage mixed-use development in the area between the Connector and 38th Streets south of the Boise River.

Garden City City Council Members moved to remove the overlay earlier this year after Jones, one of the partners on this 34th Street project, filed suit after city council denied his shipping container park project in the district. The court’s opinion called out several inconsistencies in code and unclear requirements for parking and other requirements in the Live Work Create District rules, as well as allowed Jones to move ahead with his project as originally proposed.

But, at a meeting in July, council members opted to remove the overlay instead of making changes to the code section. There have been discussions of Garden City rewriting its zoning code altogether, but it is unknown when that project will begin or when it could be completed.