The CO2-filled air in busy classrooms at Boston University was recently put to good use—as fertilizer for a rooftop garden, as part of a scientific study. Researchers repurposed the CO2 coming from a campus building’s exhaust to help grow plants in the experimental BIG GRO rooftop garden and found that spinach, in some cases, quadrupled in size compared to a nearby control group.

“We wanted to test whether there is an untapped resource inside buildings that could be used to make plants grow larger in rooftop farms,” Sarabeth Buckley, now at the University of Cambridge and the study’s lead author, says in a news release. “Creating more favorable conditions that increase growth could help make rooftop farms more successful and therefore more viable options for installation on buildings.”

The study, published in Frontiers in Sustainable Food Systems, showed how the team grew spinach and corn in areas receiving fanned CO2 exhaust. A control group of the same plants also on the roof were fanned, but without CO2. The researchers said they selected spinach and corn because both are relatively common, edible plants, but they have different photosynthesis pathways (C3 and C4, respectively).

“There are still many aspects of this system that must be determined before it can be implemented, such as the optimal air application design and the possible extent of the enhanced growth effect,” Buckley says. “Also, there is a decrease in growth with increased wind speed, so the optimal wind speed would need to be found and incorporated into the system design.”

The study claims that the findings provide “initial support for a conceptual system that creates a more circular carbon process within buildings, taking high concentrations of CO2 from human respiration and moving it to a rooftop farm where it can be applied for functional use to produce food that can be eaten by humans and respired anew.” 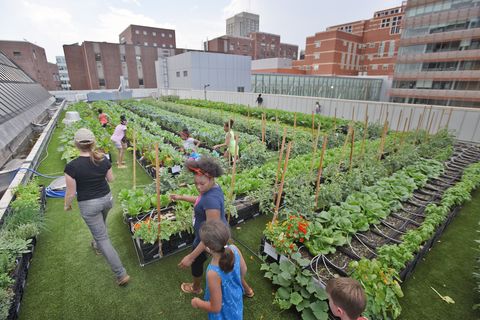 The rooftop garden at the Boston Medical Center, 2017.

Throughout the study, the team monitored the CO2 levels inside the 20 classrooms that were part of the study and on the rooftop. “With the CO2 measurements, high concentrations were found both inside classrooms and at rooftop exhaust vents when people were in the building,” Buckley says. “CO2 levels average above 1,000 parts per million—the recommended limit—in classrooms and above 800 parts per million—high enough to increase growth in plants—at the rooftop exhaust vents.”

Not every advantage can be strictly attributed to the CO2 fertilization. The corn, which benefits less from the CO2 because of its photosynthesis pathway (C4), was also two to three times larger than the controls, potentially due to its close proximity to the higher temperatures of the exhaust fan.

The study calls BIG GRO a sustainable and scalable system for using CO2 fertilization in urban environments while saying that the goal of “increasing overall urban vegetation” can help address some environmental challenges that come with pollution and farming.

Yet, there may be a downside to relying on extra CO2 for fertilization. A different study out of France, recently published in Trends in Plant Science, found that plants with a C3 photosynthesis pathway, like spinach, are less nutrient-rich when grown in an environment with higher CO2 levels.

Depending on the level of CO2, such plants have anywhere from 5 to 25 percent less nutrients—like nitrogen, phosphorus, potassium, iron, and more. The findings have gloomy implications: that food grown in the era of global warming will be less nutritious, impacting both human and soil health alike. But the French researchers point out that increasing plant biomass would still be beneficial for meeting modern food demands and mitigating atmospheric CO2 levels.

Buckley hopes her initial study can lead to a further development of the system and the eventual implementation into rooftop gardens and farms.

“If that happens,” Buckley says, “then hopefully more rooftop farms will be installed. They could provide a multitude of environmental and social benefits such as energy savings for the building, carbon drawdown, climate mitigations, urban heat reduction, local food production, community building opportunities, and aesthetic and mental health benefits.”

Tim Newcomb is a journalist based in the Pacific Northwest. He covers stadiums, sneakers, gear, infrastructure, and more for a variety of publications, including Popular Mechanics. His favorite interviews have included sit-downs with Roger Federer in Switzerland, Kobe Bryant in Los Angeles, and Tinker Hatfield in Portland.