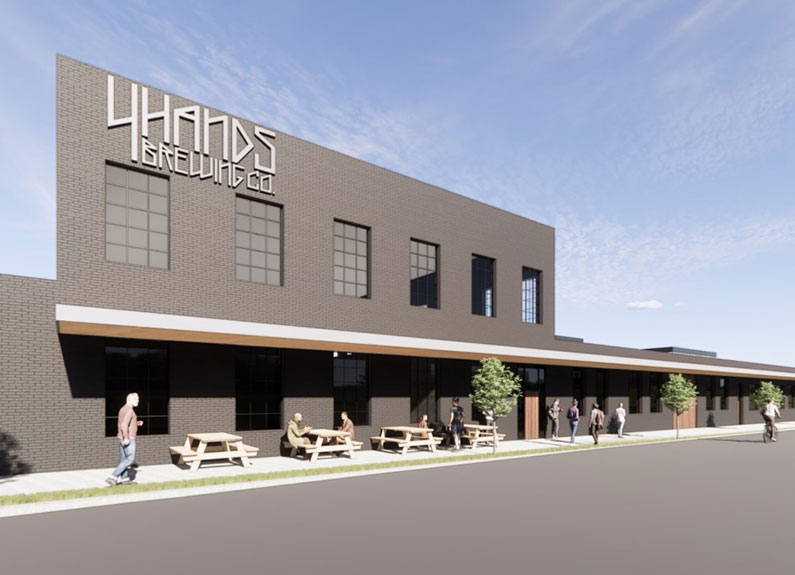 4 Hands Brewing Co. is expanding its current location at 1220 S. Eighth St. in St. Louis’ La Salle Park neighborhood, as reported by the St. Louis Post-Dispatch. In August, 4 Hands acquired the space occupied by The Pump Shop, with a plan to utilize the indoor space for manufacturing, storage and office space. The outdoor area acquired will be turned into a beer garden. The Pump Shop will be relocating for its own expansion.

Kevin Lemp, CEO and president of 4 Hands Brewing Co., had the idea to expand the brewery years ago and has partnered with the St. Louis architecture firm CannonDesign to gain momentum. “We’ve been working on this the past five years. That’s why patience is so important. It takes so much time and capital to get things moving. It’s been a long road. We have a fantastic relationship with The Pump Shop and are very excited for their own opportunity to expansion. We’ve worked so hard on this plan, and have a level of comfort knowing what our future looks like,” Lemp said.

There are two main reasons for expansion: The first is to increase manufacturing efficiency, which will allow for more experimentation and creativity. Secondly, there will be more space to accommodate brewery guests in the beer garden.

4 Hands has been operating in a 20,000-square-foot facility for the past 11 years. The Pump Shop will give 4 Hands an additional 25,000-square-foot area to build a packaging hall used for canning, tanks, labeler and other manufacturing equipment. This space will also allow for a new shipping and receiving area.

The beer garden is estimated to accommodate 300 seated guests in the 47,000 square feet upon its projected completion in 2024. The atmosphere of the beer garden will be traditional, with string lights, outdoor restrooms and private alcoves in addition to open walkways. Lemp hopes to create a more inclusive atmosphere at the brewery, inviting adults to bring their children and dogs to the beer garden. Guests will be able to rent out the beer garden for private events.

“We’re hyper-focused on building a family-friendly environment. We already have an arcade space upstairs in the second floor taproom for kids, which was actually inspired by my own children. We also have a lot of dog parents at the brewery and want to make space for them,” Lemp said.

Part of the expansion will bring in more big tanks for efficiency and small tanks for innovation, and 4 Hands will be able to offer more variety. There will be the same number of beers offered on tap at the brewery (16 draft offerings on the first floor and 24 offerings on the second floor), but the flavors will rotate more regularly. Guests will also have access to more exclusive small-batch releases.

In the spring of 2023, 4 Hands will add a gin garden to their parking lot. Like a farm-to-table concept, herbs will be grown on the property to be utilized in small batch gin production for sister brand 1220 Artisan Spirits. Ahead of that, however, a new year-round gin called Zenpo is slated to launch this December.

Like always, 4 Hands will have 14 seasonal beers on the market. However, eight of those 14 will be completely new by next year. Due to the popularity of seltzers at 4 Hands, there will also be new seasonal seltzer offerings next year. “It’s been an explosive category for us, and we don’t want to be like White Claw,” Lemp said. “We want to be a little whimsical and nostalgic.”

Peacemaker Lobster & Crab Co., owned by Kevin Nashan, will still operate as the food service provider in 4 Hands and serve the beer garden guests when it opens to the public. The fast-casual service style is also projected to remain the same.

Lemp’s vision is to beautify the I-44 corridor at the intersection of South Seventh Street. There are plans to start renovating the windows and painting the exterior of the brewery this week.

“We’re part of the La Salle Park neighborhood and we’re hyper-passionate about our neighbors. From the street level, we’re going to be able to bring some beautiful visuals to the community. The neighborhood has been really supportive so far. We’re still cooking up some plans to do more for the neighborhood, and it’s really about having an open conversation. We’re grateful to have that relationship with La Salle Park,” Lemp said.

No neighboring operations will be interrupted, stalled or temporarily closed during the brewery’s renovation. This project will take place in waves with $1.2 million initially being spent on manufacturing equipment. The new storage space, office space and production space is estimated to be complete by June 2023.

4 Hands is actively seeking to establish a Community Improvement District, or CID, but nothing has been confirmed. The CID would create an additional 1% of sales tax for 4 Hands patrons to fund maintenance, free parking and landscaping upkeep to beautify the property.