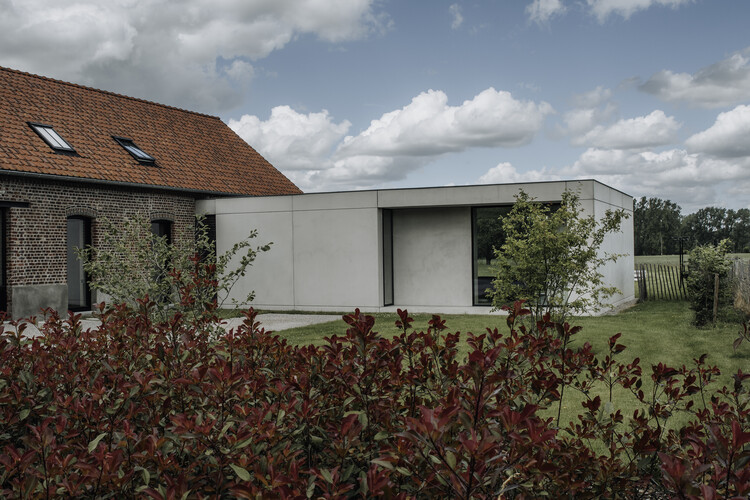 Text description provided by the architects. The project involves the conversion of a house in a rural area of Belgium. On the site, there were originally the house and some hangars of the former agricultural activity. Due to the poor condition and the local spatial policy, the hangars had to be demolished.

Given its charm and its typical appearance for the Belgian rural environment, the architect strongly desired to preserve the house. To meet the program, the house was extended so that an L-shaped plan is obtained. The annexed part is made of exposed concrete on the inside and outside, according to an open character to fully exploit the orientation and to make the surrounding landscape present for the living experience.

The facades of the existing house are largely preserved and locally adapted according to the newly designed plan. The existing house is spatially and structurally composed of a succession of transversal walls that carry the intermediate floor and roof structure. A recognizable construction of this typology is made tangible in the plan by organizing some visibility and circulation axes through these walls.

The coming together of the two wings of the L-shape is clearly articulated in material and space and attempts to generate spatial tension. On the ground floor, sliding doors provide a flexible open character so that the relationship between the spaces and the desired atmosphere can be adapted according to the needs of the moment. In use, views, and perception, it is attempted to let the different spaces communicate with each other and create a surprising and lively spatiality.

The materials aim at a warm and rural character that simultaneously leaves space and tranquility for the spaciousness of the house. An outbuilding was built in an identical brick to the house and wishes to be a simple and serene volume that tries to form a whole with the house. To maintain this serene atmosphere, the gate on the street side of the house is provided with facing brick. The home wishes to create a certain aesthetic and beauty that does not stand alone but is a carrier of life in the home.