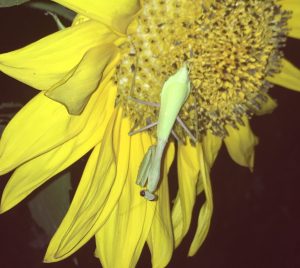 The mantis, an insect in the order Mantodea—which contains over 2,400 species—is an opportunistic predator. Eating insects like beetles, crickets, flies, and butterflies, it will even cannibalize another mantis. Its diet can include snakes, frogs, lizards or even small birds. It is a feared predator because, once in its grasp, there is no escape for the captured prey. The mantis is a deadly, indiscriminate killer in the insect world while being kept as a pet in some parts of the human world. The mantis is also eaten by birds and reptiles. There is a fine line between predators and prey; the mantis is both.

Mantises, a term used in the United States, belong to the family Mantidae. Thus, in most of the world they are referred to as “mantids.” The praying part of their name comes from the enlarged front appendages that are held folded in front of their bodies as if in a position of prayer. They are relatively harmless to humans, having no poison or venom in their bite. They do not sting or carry any infectious diseases.

Depending on the culture, some say that, because of the praying hands, mantises represent piety, spiritualism and the possibility that angels are near. However, from the standpoint of its prey, this couldn’t be further from the truth (no angelic thought here). The mantis is the only insect capable of turning its head from side to side without moving its body. This is a tremendous advantage, allowing it to sneak up on prey and strike with lightning speed.

A mantis can reproduce asexually or, most often, a female will attract a male to fertilize the egg sac stored in her abdomen. But, he had better beware during this process, because the female will try to cannibalize the male during fertilization. After the eggs are fertilized in the fall, the female attaches the entire egg sac to a wall, branch or garden debris. In the spring, this results in immature mantises. Most commonly the mantis is brown or green, and—with its long thorax—blends in with sticks, twigs and leaves in the garden. The average lifespan of a mantis can vary anywhere from four weeks to six months.

Some praying mantises can fly; others cannot, depending on species, life stage and/or gender. Some are capable of swimming.

Some believe mantises are spirit animals centered in the stillness of the earth. Their waiting posture seems to show calmness, peace, harmony and being one with nature.

I was lucky enough to encounter a mantis last year in the garden, living on a giant sunflower. I found her there day after day. As that sunflower matured and began drooping, I moved her to a fresh flower. I continued to move her until one morning she wasn’t there anymore. I like to think her growing abdomen was finally ready to deposit her egg sac in the garden to complete the cycle. I hope I helped this process, being one with the earth.