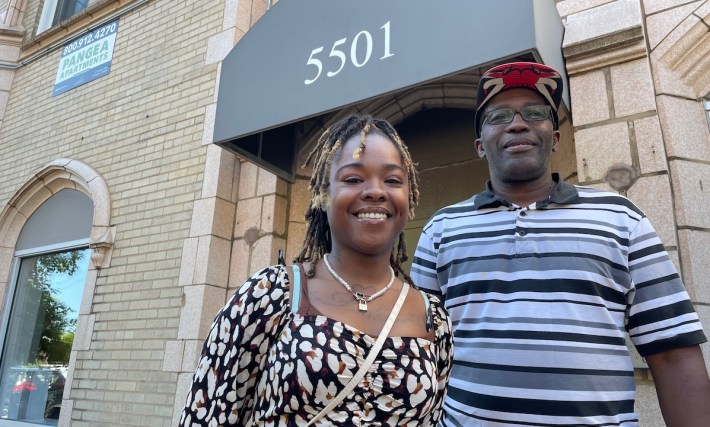 The group of 14 tenants filed a lawsuit Monday seeking class action status against Pangea. It asks for compensation for “deceptive and illegal business practices,” according to the suit. Pangea is one the city’s largest real estate companies, with more than 13,000 apartments between Chicago, Baltimore and Indianapolis.

The federal complaint alleges Pangea knowingly chooses not to fix serious maintenance issues to boost profits, leaving tenants to deal with rodents, roaches, water damage, mold and unheated apartments in the winter. The company has had over 5,000 building code violations since 2009, according to data from the city’s Department of Buildings that is detailed in the lawsuit.

“The issues are systemic across all Pangea apartments. They choose not to put money into the maintenance that’s needed,” said Christopher Wilmes, one of the attorneys suing on behalf of the tenants.

Pangea has long faced allegations of abusive tenant practices, and in the decade before 2019, the company filed over 9,000 eviction cases, according to an investigation by the Chicago Reader.

Willie Bradley struggled with insufficient heating and health issues caused by mold over the eight years he lived in a Pangea property, he said. Even in the coldest weeks of the winter, the apartment’s radiator only turned on for about 15 minutes at a time, according the lawsuit.

“My apartment was never heated sufficiently. When I was inside my apartment, it felt like being outside,” Bradley said.

The building Bradley was living in also had broken tuckpoints that allowed water to leak inside, the suit states. The issue went unaddressed for over six months, and in that time the leaks worsened, causing the walls in his apartment to “puff up and buckle” under the water damage, according to the lawsuit.

Bradley’s apartment also suffered from mold, which Pangea staffers painted over instead of treating, according to the lawsuit.

“We demand better for ourselves and for thousands of other Chicagoans,” Bradley said.

When Kayla Jones first moved to Chicago from out of state, Pangea moved her into a different apartment unit from the one she initially toured and signed a lease for, she said. The switch left Jones with a decrepit apartment infested with rodents, the lawsuit states.

“I was moving from Dallas, so I didn’t have any resources to fall back on,” Jones said. “There were obvious signs of pest infestation. Feces from roaches and rat droppings were on the carpet, and obvious signs of mice holes in the walls.”

When Jones submitted work orders to get the issues fixed, Pangea closed the complaints without addressing them, according to the lawsuit.

Pangea Real Estate officials could not immediately be reached for comment.

Click here to support Block Club with a tax-deductible donation.

Thanks for subscribing to Block Club Chicago, an independent, 501(c)(3), journalist-run newsroom. Every dime we make funds reporting from Chicago’s neighborhoods. Click here to support Block Club with a tax-deductible donation.

Listen to “It’s All Good: A Block Club Chicago Podcast”: