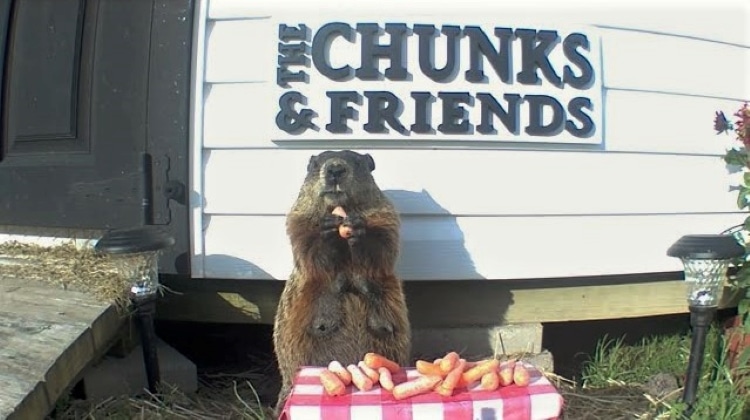 When Jeff Permar of Middletown, Delaware, noticed that the veggies in his garden were being eaten, he was determined to find the culprit. It wasn’t just some nibbling here and there, either. In all his 20 years of gardening, Permar says he’d never seen so much damage: “Everything I was planting was getting eaten to shreds.” He suspected the culprit lived under his shed, so he installed a motion-detecting camera nearby and waited. After catching some other greedy critters, the camera finally captured footage of the animal guilty for most of the damage: a groundhog, whom Permar named Chunk. The bold animal snatched a piece of produce and sat down to eat it right in front of the camera.  Jeff recalls that Chunk “looked straight into the camera like he was saying, ‘Yeah, I’m here. I’m eating your garden. What are you going to do about it?’”

Chunk had a ravenous appetite, and certainly wasn’t a picky eater. The camera captured footage of him chowing down on practically everything in the garden, from apples to tomatoes to carrots to broccoli. Permar admits that he was a little upset at first, but that none of his attempts to deter Chunk, including building a fence, worked. All his efforts were in vain, especially when Chunk began bringing his girlfriend to share in the spoils. Over time, though, by watching the entertaining footage of the two animals munching away, Permar was eventually won over by the two bold groundhogs. As for his change of heart, he says, “They’re just trying to survive, just trying to make it out there in the wild. If I can do a job to protect them and keep them safe, prolong their life, I’m all for it.” That’s when he had an ambitious idea: “I was like, ‘I’ll give them their own garden.’”

Once the groundhogs went into hibernation, Permar began working on the surprise. He started his own garden, as usual, securing it as best he could to keep the animals out, and then planted a patch just for them. After all his work planting not one, but two gardens, Permar couldn’t wait to see the animals’ reactions. “I was looking every day,” he says, wondering, “Is he gonna come out today?” Sure enough, come early spring, Chunk and his girlfriend (whom Permar named Nibbles) ventured out from under the shed. The two were delighted with their garden, continually returning to enjoy the fruits and veggies. Then, not much later, their family grew—Permar noticed baby groundhogs showing up in the camera footage. “Now, I literally have five groundhogs that are coming in and out,” he chuckles.

Knowing that others would likely enjoy watching the groundhog family as much as he did, Permar started a YouTube channel for Chunk, posting the footage from the camera. “We all coexist,” Permar explains in the bio of the channel. “This is his land too, I just put a garden on it! So munch away.” When the other groundhogs started to appear, the generous gardener even set up a picnic table near the entrance to where the groundhogs live under his shed, around which the animals do actually gather to enjoy their meals and snacks.

Scroll down to watch some clips of Chunk, Nibbles, and their little family enthusiastically enjoying their snacks, and check out the other “Chunk the Groundhog” social media accounts for frequently updated content that’s sure to brighten your day.

When gardener Jeff Permar realized that the critter living under his shed was also eating his garden, he set up a motion-detecting camera to find out what it was.

It turned out to be a very bold, very hungry groundhog, who would look directly into the camera while chowing down on Permar’s garden produce.

Despite his best efforts to deter the groundhog, whom Permar named Chunk, the determined animal continued to ravage the garden. So, Permar decided to plant him his own garden instead.

Chunk started bringing his girlfriend, Nibbles, to share in the spoils. After that, it wasn’t long until they were baby groundhogs munching away, too.

Now, Permar is feeding several hungry groundhogs, but he doesn’t mind. “They’re just trying to survive,” he says. “If I can do a job to protect them and keep them safe, prolong their life, I’m all for it.”

20 Adorable Animals Booping the Camera with Their Curious Snoots