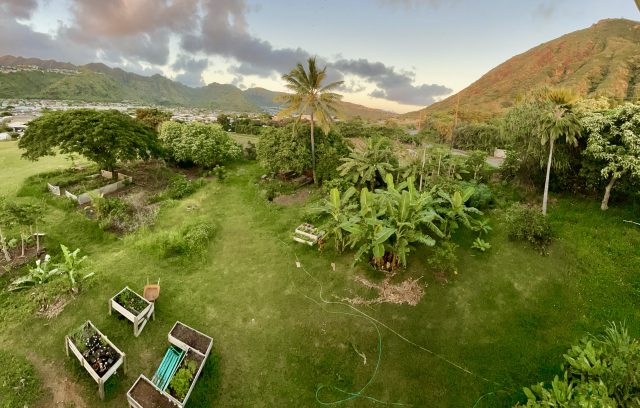 Paul Balazs grabbed a shovel and started digging, carefully splitting up a banana plant for propagation in the Peace and Sustainability Garden at Kaiser High School.

He started as an English teacher at the East Honolulu school a decade ago. Now, he’s teaching leadership training and theory of knowledge, and is a student adviser. But to community members and colleagues, Balazs is a “life force,” as neighboring farmer Heather Mohr put it.

In 2016, the initial idea for the garden came to fruition after a group of Balazs’ students in the Wipeout Crew, an extracurricular eco-conscious and service-oriented club that Balazs has been running for the last eight years, came to him wanting to create an outdoor space that reconnected them with nature.

Balazs is the only teacher in the Wipeout Crew. In his free time, he mows the grass, waters the plants and organizes club events outside of school hours. Still, he doesn’t want any recognition.

“If you’re doing it the right way — anything in life — it’s not about you,” Balazs said.

This year, 135 students signed up for the club, even though it doesn’t earn them any school credits. Over the last five years, Balazs and his students have grown 78 different species of plants — 52 of which are Native Hawaiian, and the rest consist of herbs, vegetables and fruit.

The Hawaiian section of the garden was named Hau Hele Ula, after the endangered native hibiscus, and includes plants that would have been found in Maunalua or other drought-tolerant areas.

Of the many contributions the garden and the Wipeout Crew have received, Balazs said the generosity of Keiki and Plow, an education oriented family-owned farm right behind Kaiser’s back gate, has been invaluable — especially the bananas.

At least 18 banana plants have grown from the four donated by Mohr, executive director and owner of Keiki and Plow, and her late-husband Ryan.

Mohr said the keiki plants she donated to Kaiser were grown from plants that were given to her and her husband from other farmers around the islands. Now, the banana plants that grow in the garden at Kaiser will supply students for generations to come.

On a recent Friday after school, Balazs was explaining to the Wipeout Crew how every banana plant only produces one rack of bananas. But, as long as the rhizome, the stem of the mother plant, is healthy, the mother plant will continue to produce.

“Roots first, fruit to follow,” Balazs said. “It’s not just about plants, it’s also life … You need foundation, so when things change that you haven’t planned for, you have the best shot to endure disaster.”

Balazs showed the students how to dig the holes and plant the keiki plants, then had the crew split off in pairs to do it on their own.

“I think part of why the garden is so successful is because Paul is at the head of it,” Mohr said. “He’s utilizing the garden to reach these kids and create a pause in their day that brings forth a lot of mindfulness.”

“Paul is a life force,” she said, adding that as a natural leader, one of his many gifts to the community is his ability to connect others.

The Wipeout Crew, which is a part of the youth network at the Surfrider Foundation, was initially solely focused on beach cleanups. Since they started, the students have removed thousands of pounds of trash from Oahu’s coastlines.

Balazs saw an opportunity to steer the Wipeout Crew towards aina-based education when he spotted the potential for a neglected patch of land on Kaiser property — at the time, it was overflowing with haole koa and 8-foot high California grass that took several months to clear in 2016.

During the clearing process, Balazs and his students uncovered rock walls and taro growing along the fence line. They discovered that the area was formally a Hawaiian garden and a taro patch that had been a part of a Hawaiian navigation class at Kaiser over a decade ago, under the care of Michelle Kapana-Baird, a Kaiser teacher of 27 years.

Kapana-Baird’s vision and story helped give the Peace and Sustainability Garden its name. The kou tree she planted on Sept. 11, 2001, to provide a place for students to go and reflect on what had occurred, is still standing tall.

With Balazs’ support, the Wipeout Crew has learned how to grow their own food, care for native plants, and prompted a switch from Styrofoam cafeteria trays to recycled compostable cardboard at Kaiser.

Balazs has also encouraged his students to get involved at the Capitol. In 2018, he took several students downtown to testify on a bill to ban sunscreens that contain chemicals that scientists have found are harmful to the reefs.

Shannon Murphy, a former student of Balazs and the president of the Wipeout Crew that year, was especially involved with campaigns to pass the bill. She now works for the School of Ocean and Earth Science and Technology at the University of Hawaii Manoa.

“He really makes you feel like you can accomplish anything,” Murphy said, adding that if it wasn’t for Balazs, she never would have pursued environmental science.

Recently, he also took on the role of the student activity coordinator, after the retirement of his predecessor, Rinda Fernandes.

Fernandes had held the position for almost half a century when she retired in July, and said Balazs was the only person she wanted to take over her job.

“There’s no one like Paul,” Fernandes said, adding that Balazs has an unmatched ability to inspire people to help each other and the environment.

But Balazs didn’t always know he was going to become a teacher.

Born and raised in Kamiloiki Valley, Balazs is the son of a world-renowned marine biologist and a Kaiser Permanente social worker.

Balazs described himself as a “bad student” who was a “long-haired super-stoked surfer,” and briefly reminisced about his time as a guitar player in a band, before casually mentioning that for six years he worked several jobs, seven days a week.

Initially a film major at UH, Balazs transferred to Kapiolani Community College to be closer to one of his jobs and have more time to surf.

At KCC, he fell in love with education, inspired by his sociology professor, Robin Mann, who hosted the local educational TV series, Romper Room, in the 1960s.

Mann, a teacher for 51 years, said Balazs’ eagerness to learn and to get involved in community work impressed her more than anything.

“Students have to experience something before they really understand, and that’s why Paul is such a superior teacher,” Mann said.

Balazs recalled how Mann took his class on a trip to Kauai one year, and said it inspired him to spearhead several student trips to Fiji, Thailand and Laos.

Mann also encouraged Balazs to question how he could be of service in his community, which led him towards his interest in special education, coaching for the Special Olympics, and his career as an educator.

Outside of his work at Kaiser, Balazs has served on the board at The Arc in Hawaii, a nonprofit founded by a group of parents of children with intellectual disabilities, and is currently on the board of directors for Live Aloha.

Balazs is also pursuing his master’s degree in curriculum studies, with a focus in sustainability education. After seeing the positive effects of the Peace and Sustainability Garden, Balazs is now learning about the impact of outdoor education and specifically the effects that school gardens have on young people in relieving pressure and stress.

Though his long hair is long gone, his stoke for education has remained a constant.

“On my first day of working as a teacher, there was a part of my heart that I didn’t know was even there, that just opened up,” Balazs said. “It’s all about the kids.”

“Hawaii Grown” is funded in part by grants from the Stupski Foundation, Ulupono Fund at the Hawaii Community Foundation and the Frost Family Foundation.

Civil Beat’s education reporting is supported by a grant from Chamberlin Family Philanthropy.

Sign up for our FREE morning newsletter and face each day more informed.