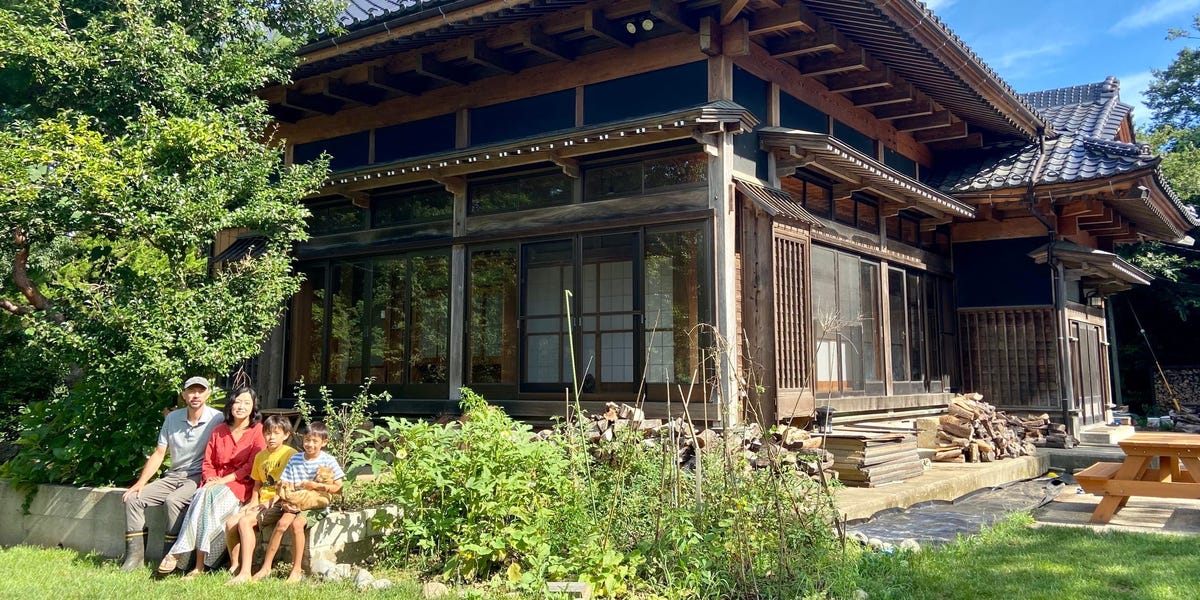 Jaya Thursfield and his wife, Chihiro, bought an abandoned traditional Japanese farmhouse in 2019 and have spent the past two years turning it into their dream family home.

The couple, both of whom work in IT, moved to Japan from London in 2017 and started looking for a house.

One of Thursfield’s priorities was finding a house on a relatively large plot of land so they could have barbecues and a vegetable garden and so that their now-10-year-old twin sons, Anton and Marco, could play outside comfortably.

“The abandoned-house, or akiya, topic had sort of appeared in a few articles in the previous couple of years, and people were just starting to talk about them,” Thursfield said. “So we thought that might be the most likely and affordable way of getting a house on a larger block of land.”

In February 2019, the Thursfields bought the house at auction.

The traditional Japanese farmhouse, known as a minka, had sat empty for several years after the previous owner died and the family declined their inheritance of the property, Thursfield said.

“We loved the house in terms of how it looked,” Thursfield said. “I remember the first time I saw it in person, it was quite spectacular, and I was really blown away by it.”

Thursfield and his wife had to submit a bid at the city offices in Ibaraki. It was a blind auction — so they had no idea how many others were bidding or how much they were bidding — and the minimum bid was 2.9 million Japanese yen (about $26,000).

“You have to submit a bid that you think will win, but you don’t want to win by too much,” Thursfield said. “It was quite nerve-wracking.”

They ended up winning the auction with a bid of 3 million Japanese yen (about $30,000).

The couple had been able to take only a quick look at the house before buying it, so they were happy to find that it was in good enough condition that they could renovate it instead of tearing it down.

Since then, the couple has spent roughly $150,000 renovating the interior and the exterior.

For the renovation, they enlisted the help of an architect friend in Tokyo and a local father-son carpenter team. Throughout the process, the Thursfields lived nearby with Chihiro’s mother.

“This was all completely new to me, so jumping in the deep end,” Jaya said. “I ended up doing quite a lot of the DIY myself but definitely couldn’t have done some of it, especially the structural work that the carpenters were doing.”

Thursfield has documented the renovation process on his YouTube channel as “a kind of keepsake for my family,” he said.

Thursfield declined to break down the renovation costs by category, but he plans to eventually do so on his YouTube channel.

The property’s multiple sheds were full of stuff the previous owner had left behind, including two cars, a tractor, and farm and gardening equipment.

Some of the farm equipment was in usable condition, Jaya said.

“Some of it we still use, but a lot of it was not salvageable and we had to either throw away or sell it,” he said.

Inside was a similar story. The kitchen was in need of a total overhaul — but first it needed to be cleared out.

The ’80s kitchen was the only Western-style room in the house, Thursfield said in one of his YouTube videos.

The Thursfields found furniture, clothes, books, and magazines abandoned throughout the house.

“This was truly an abandoned house in terms of the declined inheritance and everything left behind by the previous owners,” Jaya said.

Amid all the garbage, they also came across a pleasant surprise of about $700 cash.

After nearly two years of renovations, the Thursfields moved into the house in December.

On the home’s exterior, they replaced some of the single-pane windows with double glazed windows and replaced the siding.

“The house mostly had a kind of tin siding, which was kind of popular post-war in Japan,” Jaya said, noting that the initial plan was to replace it with a more modern version of tin siding. “But we changed our minds halfway and decided to go with wood there.”

Though they replaced most of the house’s traditional tatami flooring with wooden floors, they kept the tatami in one room, which they plan to use as a tea room and a guest bedroom.

“It’s really nice to sit and lie down on tatami,” Jaya said. “It’s hard, but it’s cool. And that room on the corner, it’s got a nice view out into the garden.”

The three bedrooms are still a work in progress, with the kids’ bedrooms mostly finished and the main bedroom still needing to be painted.

Now that they’ve moved in and the contractors have finished the main renovations, the Thursfields are making the finishing touches themselves.

“The walls look a bit bare at the moment,” Jaya said. “We haven’t really put any bookshelves or paintings or decoration or things like that up in the house yet. The house is functional, just to make it look good is the next step.”

For anyone looking to undertake a similar renovation project of an abandoned home, he recommends thoroughly inspecting the home before buying to make sure there’s no substantial damage. They were lucky that there wasn’t any in their case, apart from some minor water damage from a roof leak, he said.

“If price is the main concern, I wouldn’t say getting an akiya and renovating it is the cheapest way to do things,” he said. “Of course, there are people who have done it really cheaply. It does depend on your tastes.”