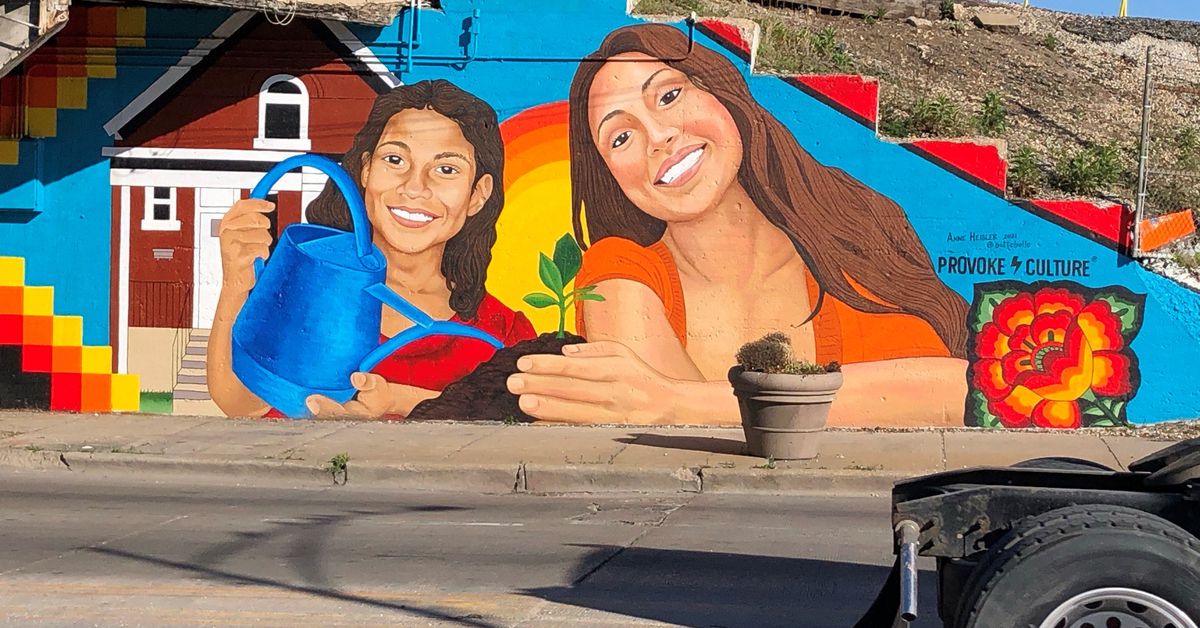 Anne Heisler didn’t learn the intricate painting skills she uses as a muralist the traditional way.

She picked them up working for about 15 years as a cake decorator after dropping out of college.

“It’s been a huge help for me professionally because restaurant industry jobs, kitchen jobs, are very fast-paced,” the 39-year-old Humboldt Park resident says of her cake-decorating experience. “They teach you to work very quickly.”

She put that to use on a recent mural commission that brightens a viaduct at 47th Street and Archer Avenue in Archer Heights on the Southwest Side. Hired by a neighborhood group, she designed the 113-feet-wide by 14-feet-tall mural and painted it with others from Provoke Culture, a group of artists headed by Sam Kirk.

She took her first art class when she was 5 and continued to study art but decided not to go to art school because she didn’t think she could make a living as an artist.

“There are a lot of techniques that you use in different industries that kind of all end up relating to each other,” she says of her years decorating cakes. “I basically was just learning a lot of different skills, working with my hands and doing production work.”

The Archer Heights mural is Heisler’s first big mural. It took about a month to design and a week to paint, thanks in part to disruptions from pigeons that kept flying around her concrete canvas.

The mural features four portraits. Heisler, who grew up in Evanston, says she has always loved drawing people.

“I just think humans’ facial features are beautiful,” she says. “Noticing the way a small change in someone’s nose can completely change their face and just all the beautiful skin tones and cultures. I’ve always been drawn to that. And I just always wanted to re-create that.”

Heisler says she was trying to reflect the neighborhood with the viaduct mural.

She says only one of the images was based on a real person, that of the man at the right: Jose Barrera, a community leader and dean of students at Columbia Explorers Academy.

The two women seen in the mural working on a garden symbolize “planting seeds for the future, literally,” Heisler says.

Oh, and she says she still goes back to the bakeries where she used to work to help out from time to time.